The High Cost of Online Gaming


It’s time to revisit a serious topic that I’ve brought up before:


When I first talked about this a year ago, it sparked a lot of discussion.

“I got a huge amount of feedback in almost no time at all. It was as much positive and praising as it was negative and hateful, and many people shared their own stories and experiences. Several commented on how brave I was to bring up the issue at all.”


Why am I writing about hate speech again? Because nothing has changed.
Because someone close to me -- my mother, Katja -- is being systematically harassed for being a gamer. Because I want things to change but need your help.
About a year before I wrote and published the post addressing the dark side of gaming, a Finnish R6S team picked my mum as their target. That was back in 2018, and despite everything that we’ve done, they’re still harassing her.

Here’s katjaplays_’s story in her own words:

I’ve been a gamer since the 80s and started streaming on Twitch about a year and a half ago. Two Finnish R6S teams who compete in Electronic Sports League tournaments and live stream their games took offense to me and my daughter playing the same game the second they heard about it. Their whole team consists of less than twenty people, all men, aged 19 to 35 or so.
One of them managed to get into a match I was playing. While I was present, they called me a shitty old whore, a r*tard monkey, a wrinkly old scrotum, an old shit, a fucking idiot, a bitch who should get a job, and a dry snatch with so much sand in her cunt there ain’t enough in the whole world to fill it. [TN: Most of these, the last one especially, are gendered insults in Finnish.]

I left the match in a state of shock. Later I found out they’d live streamed it all without telling me, and when I saw they were online and checked out their stream, they were still insulting me. At the end they shared my real name with their viewers, several times even to make sure they got it. I had no in-game contact whatsoever with them after that match.
It’s been two years since the incident, and they’re still harassing me and my family and spreading lies about us. I’ve had to block dozens of fake accounts because when I block one, they just make another and come into my stream to hurl vicious insults at me. They brag in their own stream how they won’t be caught because the email accounts that they use to create their fake accounts are only valid for 20 minutes. I’ve got tons of evidence of their behaviour.

[ literal translations ]
kakkimake22: a hag like that has no other friends but some autist in your stream who was bullied in school and has never even seen a pussy even though he’s 20 years old

kakkimake22: hang her, I say

kakkimake22: a shit like that ain’t useful to society

kakkimake22: your folks dropped you on your head when you were a kid, didn’t they

kakkimake22: I mean how you can’t take any criticism, can tell you’re a braindead bitch

These harassers have made several baseless claims in their live streams, like that me and my daughter have slept with them. We don’t even know them; we’ve certainly never interacted with them or met them in real life. Their goal seems to be to force me to stop playing and streaming Siege, as in one live stream their leader said that “we won’t stop [the harassment] ‘til she quits streaming”.
Almost every single time they stream, they talk shit about me and my family. It doesn’t make for great listening, especially not with all the misogynistic comments. A while ago they “joked” that I’ve got a belt made of human nipples and take it off if I’m given money; and that I use that money on Russian whores; and that I’m “a fucking autist” and my daughter is, too.
Pretty astonishing, huh?

I don’t understand how twisted you’ve got to be to come up with something like that, but then again, they usually refer to me and my family as disabled, r*tarded autists and laugh about it. They seem to aim to spread this slander as far and wide as they can.
I reported the harassment to the police last year. The bullies shared it with their gaming circles and in their streams, and it turned into a running joke among them. When the matter was investigated, they quoted parts of the investigative record and joked about it on their channel. They read aloud sections that dealt with my mental health and mocked me. To this day they make fun of me, asking each other, “are you feeling depressed?” or, “have you thought about harming yourself?”; these refer to my interview on record.
They’ve shared the entire record of the pre-trial investigation, including my personal information, with their friends and followers and God knows who else.

The first trial is now over. Two people were charged: one didn’t dare show his face, so his charges were dropped; the other one was found guilty and ordered to pay me 800€ in compensation. That will go towards covering the cost of the trial but it’s nowhere near enough as the attorney alone cost me 6,000€. So I get just about nothing in compensation and on top of that I’m in debt. [TN: The sums are around $900 and $6,770, respectively. It is a general practice in Finland that the guilty party is ordered to pay the other party’s trial costs in full.]


All this just because I’ve found my thing and play a game that I’m passionate about. These harassers are doing everything they can to make me stop streaming, stop playing altogether.


I don’t want to be a victim, and I’m not looking for pity: I want to make this public. I want every female gamer who’s been harassed and discriminated against -- every gamer, period, who’s been harassed -- to know that you are not alone.
But I also want you to be aware of how little your experiences matter, apparently, to the courts.

These toxic attitudes won’t change as long as abusive behaviour and full-on harassment like this is accepted as part and parcel of the experience in gaming. It has been extremely draining to see how these particular gamers systematically attempt to destroy my mum and the joy she finds in her hobby. They’ve done everything they can to make her stop playing, specifically to make her stop streaming R6S.

Having the charges dropped against one of them is just a cherry on top, really. You can imagine the kind of financial impact that spending 6,000€ to hire an attorney is, never mind that in the end the sole remaining harasser was only ordered to pay 800€ in compensation.

It feels so unfair after we spent two years working hard to gather evidence. We’ve got hundreds of clips and screenshots to prove these people constantly insult us online and attempt to sully our reputations. Even our attorney noted the judge’s obvious failure to take our case seriously, as is evident in the remarkably light sentence. I don’t understand it. I won’t accept it.

I hope that together we can show support to Katja in this endless fight she’s had to face alone. Let’s show her and everyone else how amazing the world of gaming can be. Let’s lead by example to show other gamers what is acceptable behaviour.

I want to make some noise in the form of a campaign, #bantoxicgamers, and I hope you will all participate. 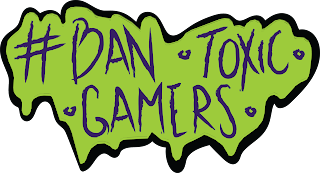 You can get started by getting a #bantoxicgamers frame for your profile pic on Facebook here:

Katja is on Twitch:

You can best reach me via Instagram or by email at rosaplays@outlook.com.